The 1875  Statue of Liberty contains the following quote

“Give me your tired, your poor,
Your huddled masses yearning to breathe  free,
The wretched refuse of your teeming shore.
Send these, the homeless, tempest-tossed to me ,
I lift my lamp beside the golden door!”,

Well prior to that In 1797 the Vermont Legislature passed a law stating,

“The inhabitants of any town in this state may build or purchase a house of corrections or workhouse, in which to confine and set their poor to work. And such house may and shall be used for keeping, correcting, and setting to work vagrants, common beggars, lewd, idle, and disorderly persons” By this means the legislature tasked towns to “relieve, support and maintain their own poor.” This law stayed intact until 1968

Flawed from its beginning, the “Poor Farm” concept strove to provide the basics of food, clothing, shelter, and medical attention for the so named “Inmates” as many received internments here as opposed to jail.  In exchange inmates, if able, provided free labor on the farm and around the house. This ideal deteriorated with fewer and fewer inmates able to provide labor as the populations grew older.  Entire families occasionally occupied rooms at the “home” with children born here and living here through their lives.  In the end only the least able lived at the home with elderly and mentally ill patients permeating the population. 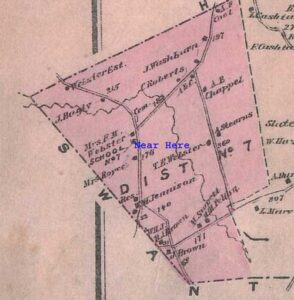 In 1833 the towns of Fairfield, Sheldon, St. Albans, and Swanton united to solve the problem of their poor.  James Mason of Sheldon arranged for the purchase of land in the District 7 of the town of Sheldon also known as the “Webster District” with children attending the Webster School.  The building housing the Poor House occupied a plot of land on the west side of the current “Cook” Road about 40 yards south of the school. A farm house now stands at that location with the owner previously uncovering evidence of the house and grounds through the discovery of bricks and human remains. The Poor House remained there until the Sheldon Springs location transaction occurred March 1846.

In 1883 eight towns belonged to the association.  In Over the Hill, compiled by E P Kearney, we read, “The records clearly show that during the first fifty years the cooperative idea was successful in meeting the needs of the various towns which from time to time joined the association.  The directors saw to it that the institution was a financial success as well as a splendid example of one way to provide a good home for those who, through misfortune, or the carelessness of their children, were forced to spend their last days in a charitable institution.”

The original barn burned in February 1893 to be replaced by a 100×40 foot structure which stood on the property until 1927 when it also burned to be replaced by a new barn.  Detailed records indicate that, although the farm proved less than self-sufficient, cows, pigs, chickens grain products, and vegetables provided income and food for the inmates and staff.

An email from a former resident prompted me to investigate the property currently identified in Sheldon Tax records as 393 Cook Road.  The email reads, “My parents bought it in the early 80s.  I think the Heald’s owned it before that, but not 100%. When my parents did dig up for the trailer there, they did dig up some skeletons.  When they re-did the siding and insulation back in the late 90s, there were home made nails and just newspaper as insulation.  They did take out a old chimney that went through the center of the house. I guess each bedroom had a fireplace at one point.”

Land records at the Sheldon Town Office show a 2 story wood frame house on the site built in 1850 and included 58 acres of land.  The last transaction occurred in 2018 with a further deed search indicating that by all reasonable assumptions this location houses the original Poor House situation just south of the Webster School.

During the early years, education for school aged children as required by Vermont State law occurred without incident at the Webster District School.  Court documents from October 1897 introduce conflict between the Sheldon Poor Farm Association and the Town of Sheldon.  It reads in part, “It will be seen by the bill and answer that a legal question has arisen between the Poor House Association and the Town of Sheldon, as to the right of the children of the facility to attend public schools of the Defendant Town.”  The court eventually ruled in favor of the children but not before the town officials locked them out of the District 11 school and forbid them to attend school.  A close examination of the proceeding will reveal that the disagreement was over “who pays tuition” not whether the children must be educated.

In another court action a the Supreme Court of Vermont during the November 1926 term the matter of property taxes pitted the Association against the Town.

A scathing report from the St. Albans Weekly Messenger of Thursday Feb 4, 1897 calls the 50 year old housing unit a rack and ruined structure decaying from 50 years of neglect.  I quote, “then throw in sixty-three paupers to balance and allow them to exist, not live, in a place that has been befouled for five decades by hundreds and hundreds of filthy people, and you have the situation at the Sheldon poor house today.”  Details provided by three reports after a visit to the Poor House suggest support for this evaluation.

The Sheldon Poor House Association incorporated in 1906.  Kearney describes the Poor Farm as “in generally fair condition” in 1913 however the building burned on Jan. 23, 1913 in a fire set by a mentally ill female inmate scheduled for release to the Waterbury State Hospital due to mental illness.  A new building replaced this structure in December 1913 which housed up to 125 people within its three stories measuring 141 x 40 feet.  A 1962 fire on Jan 23 set by an inmate badly damaged 8 rooms on the third floor. 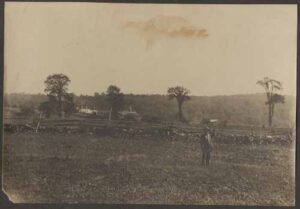 People represent the real history of the Poor House.  Well intending earlier citizens, although forced by government decrees, hoped to provide a better environment for the poor.  Citizens, directors, and overseers worked diligently to maintain good living conditions and a pleasant atmosphere at the home.  Rules governed how the overseer would perform daily duties.  Behaviors for remaining in the house addressed the daily and weekly activities of inmates.  Any able bodied person worked on the farm or in the house.

Social activities and curfews addressed the requirements of living at the house including many deriving from community norms especially in regards to adherence to religious activity on the Sabbath. 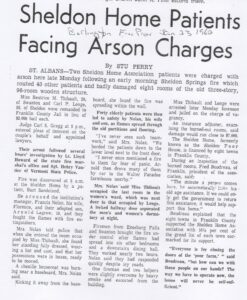 Not all was rosy at the farm.

In 1962 two inmates attempted to burn down the building. 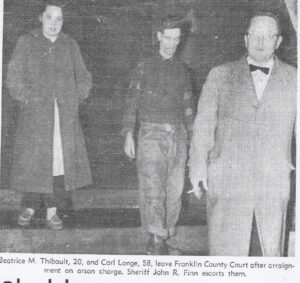 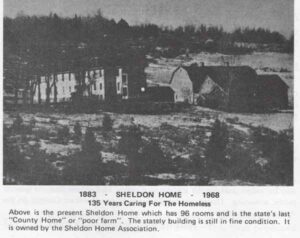 In his 1990 article Steve Young states, “The Sheldon farm was the best of a bad system.  Poor farms and overseers of the poor constituted, statewide, a jumble of locally run, patched-together institutions that often resulted in harsh, inhumane treatment of the downtrodden and disabled.  And yet at Sheldon Springs, by most accounts, poor farm inmates, especially in the institution’s later years, were treated with care and consideration.”
Relatives, friends, and neighbors visited the home and the inmates although not as frequently as might be needed.  At least on living resident says  “I remember going with my Grandparents every Christmas  We went up every year with a group of other volunteers and joy and happiness to all on that special day.  I can remember walking in and what it looked like. Those days I will never forget.  They are the most memorable when I was growing up.” 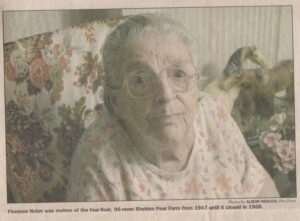 In spite of our best intentions the Poor House concept failed to live up to expectations.  Once at the farm few inmates left.  In 1968 a Mrs. Nolan, overseer, states that inmates “had no other home, knew no other home. Home was here.” The hope of temporary assistance while transitioning to a better lifestyle eluded the efforts of all involved. the State of Vermont.  On October 1, 1968 all inmates of the Sheldon Home moved to other locations in the state.  Now nearly 50 years later we can wonder if the “new” system works.  The “New” system attempted in 1968 now modified by additional legislations still leaves many of our more unfortunate citizens homeless, hungry, and unattended by medical or mental health specialists.  Some states continue to examine the “Farm” concept today to lessen the situation of homelessness, but few return to that idea with zeal.

Homelessness, poverty, ill-health, and mental health persist through human history.  Our means of dealing with these persons and their issues successfully continues to elude us.  The Sheldon Poor Farm represents one effort successful at the time to a limited extent and then rendered obsolete not by the elimination of poverty but by new found methods of deal with it.

From 1797 until 1968 each town maintain responsibility for the “poor” in their own best efforts to meet the commandment to look out for the poor.  In 1883 the towns of northern Franklin County cooperated in the establish of the Sheldon Poor Farm, so called because it was located in the Town of Sheldon.  Although many of the previous structures burned the buildings in 1968 continued in sufficiently good condition to be sold to a local businessman Homer Durkee.  Through his prodding the Town cleared and cleaned the nearly abandoned cemetery next to the farm.  He eventually rented out the premises in 1973 to “The Threshold Center” where drug rehabilitation and treatment candidates lived.  On Tuesday October 24, 1978 the residential facility burned to the ground.  Sufficient suspicion prevailed to require a state police investigation.  The Burlington Free Press Oct 25 1978

Some who called the Sheldon Poor House “home” continue to rest there.  The Poor Farm Cemetery located on the Poor Farm Road holds the remains of the many who “remained” by chance not by choice.

“A Disgrace to Humanity: Shocking Condition Of Affairs That Exist At The Sheldon Poor House” St. Albans Weekly Messenger Thursday Feb 4, 1897.
(Transcription in possession of the Sheldon Historical Society)

“Sheldon Poor-House Association By Laws Jan 6, 1942″ (In possession of the Sheldon Historical Society)”