The Thief In The Night!

A Tale From Sheldon’s Haunted Past

Blend together circumstantial “facts” with coincidental “testimony” then add far-fetched speculation and arrive at a nearly believable “History” lesson.  Such is the report generated in Sheldon on October 13, 2005.

These facts stand the test of time and bear witness to the incredible event.  October 13, 1905 happened to be a “Friday”. Thus a Friday the 13th on a cool fall night in northern Vermont spawned some already generated fears.  One reporter records “It was midnight on October 13, 1905. The night was clear in this town with a FULL MOON playing in the shadows.” 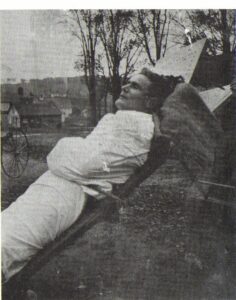 Eugene Trudeau truly lived over the real Jennison-Gallup General Store on Bridge Street in Sheldon, VT where he performed the duties of store clerk while attending to the remarks are rumors of countless customers throughout the day.  One report attested to the “fact” that a robbery occurred in East Fairfield a mere 10 miles across the woods giving cause to fear the presence of a “stranger” seen earlier in the day. When Eugene’s sleep terminated unexpectedly due to noises in the building that he could not attribute to pranksters or vermin, he conveniently looked through a floor vent that just happened to be directly over the store safe.  Eugene says “The stranger was a big man and looked powerful even as he leaned forward studying the safe.” Mr. Trudeau, a man of extreme caution, retrieved his already loaded shotgun and returned to the overlooking vent.  “Trudeau reached for his shotgun, aimed, and fired. The stranger slumped to the floor, his neck shattered.”

W.C. Marsh, an actual Sheldon resident of the town, arrived on the scene first.  The speculation of two additional robbers produced a search revealing some horse tracks along with blankets burglary tools and lots of speculation.  A search for accomplices resulted in no arrests.  Comments include the finding of nitroglycerine, sums of money, and  evidence from the East Fairfield burglary being found on or near the body.

Reports become blurred here.  One says that the body remained on the undertaker board in town for several days waiting for identification.  According to George E.  Stebbins, an actual Sheldon citizen and administrator of the estate reported that the stranger was buried in an isolated spot in the cemetery. His grave stone reads “Unknown man shot in the Jennison and Gallup store while in the act of burglarizing it on Oct. 13, 1905.” According to town records the money found on the victim eventually went to the school fund.  Evidence likely exists to support that as well as the speculation that “A second stranger appear on the night after the funeral.  The report states that she stayed for one night at the “Portland House” which still exists on Main St. She quickly disappeared under speculation that she exhumed the body and left town with it. No one seems to have dug up the “isolated grave” to find the body. 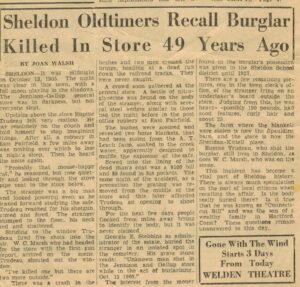 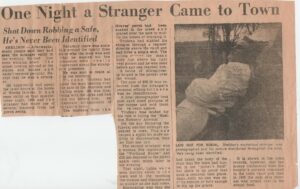 “Sheldon, Vermont” by Dorothy Hemenway Ashton recounts the story on P319 to 321with photos and follows the text of the Vermont Sunday News. From her account we have two reasonably good photos. Book available at the Sheldon Historical Society Museum.